Deconstructing the decline | The Indian Express 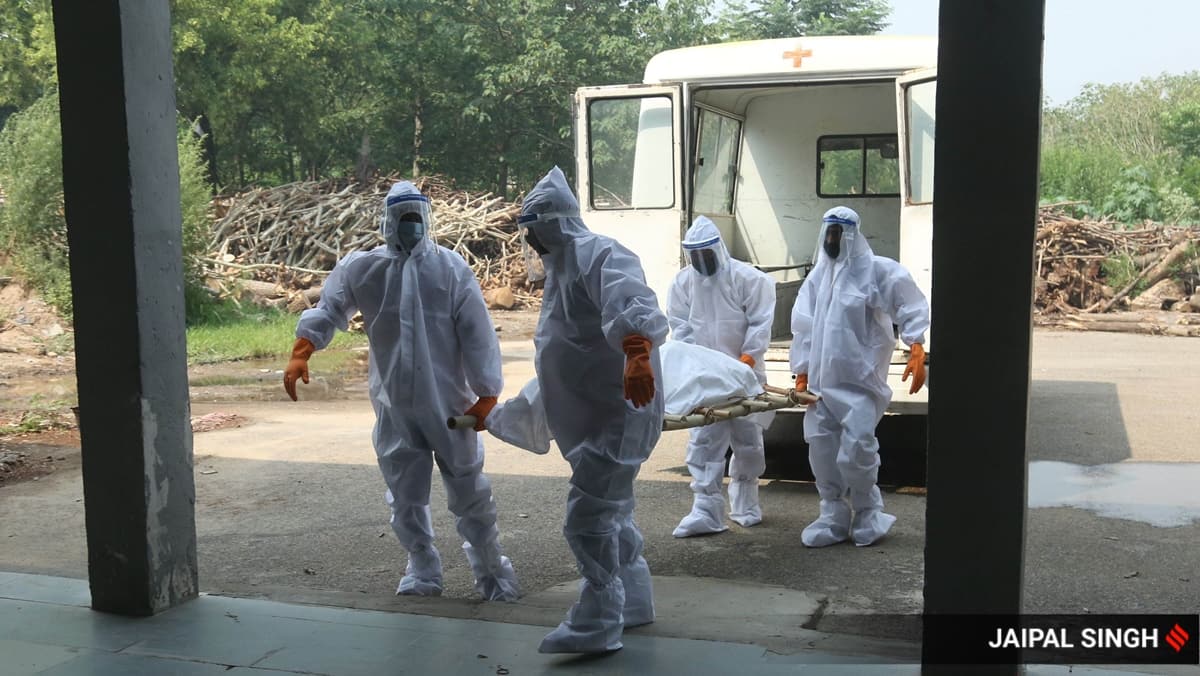 At a crematorium in Chandigarh.

As official COVID-19 cases and deaths drop in most states, the nation has heaved a collective sigh of relief. Media anchors, leaders and senior bureaucrats have weighed in on how India has fared much better than many affluent nations. Our scientists have come up with a National Supermodel, which has confirmed these claims. They have further argued there is already a disease prevalence of about 30 per cent and that if we continue with some reasonable restrictions, we will be done with the virus by February 2021. Our total tally of symptomatic infections then will be around 1.06 crores, which is about 33 per cent more than where we are today. Their report does not mention the total deaths, but we may extrapolate by the same factor to arrive at the final count of 1.5 lakh or about 120 deaths-per-million (DPM). Just for the sake of comparison, our annual DPM in a normal year is about 7,000 and that due to tuberculosis is about 60. This gives us the breathtaking claim that the COVID-19 epidemic would be merely twice as lethal as tuberculosis.

We argue that the National Supermodel is probably right on prevalence, but it may significantly underestimate total deaths. Besides clinical aspects, planning and community aspects of a public healthcare system too have significant impact on mortality. But these state-level parameters are seen only through a closer inspection of regional conditions and practices. We follow this approach.

We will use the data from COVID19india.org as on October 18, 2020 for this analysis. Given that different states have followed different testing regimes, we discard case numbers in favour of death counts, as a more reliable measure on the progress of the epidemic. This itself is a significant deviation from the model of our experts, which hinges on case numbers.

The DPMs as they stand today for a few states and cities are given below.

Let us now look at the geography of the epidemic. An important insight comes from probing the urban and rural dynamics separately, since the mechanics of transmission and medical care are different.

Consider the circle diagram below for October 18 for Maharashtra. The location of each district is based on its urban population fraction, and the cumulative death rate on that date in DPM. The size of the circle indicates the total number of deaths. As weeks pass, each circle will grow bigger and rise. Mumbai, with an urbanisation of 100 per cent, has a death rate of 786 DPM and it continues to rise at 2-3 DPM per day. The red-line indicates predicted death rate assuming zero rural transmission and an urban death rate which equals that of Mumbai. 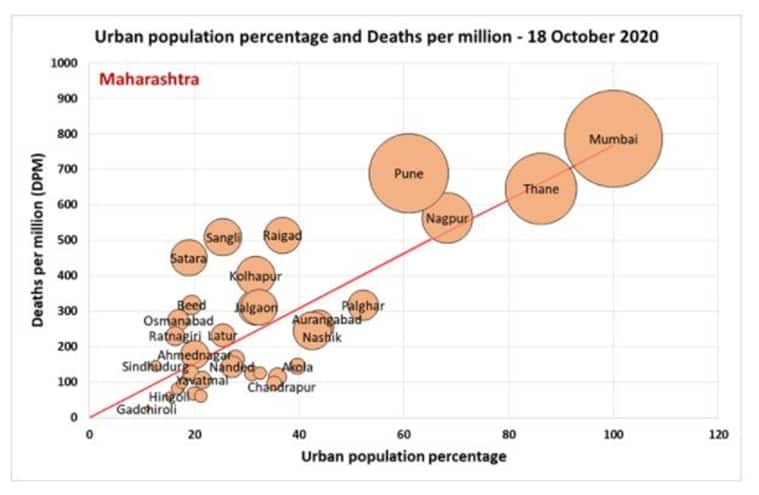 An important question is: At what final rate will the epidemic stabilise? It is clear that Mumbai is headed towards an official count of 1,000-1,200 DPM. Given that other cities have not faced the long trauma of Mumbai, we still get an estimate of 700-900 DPM as the official final death count. The actual death rates may be much higher. In Mumbai itself, in the period March-July, there were 49,000 reported deaths, which exceeded the 2019 number by 37 per cent, that is, about 13000 deaths. There were only 6,400 COVID-19 deaths in the same period. This leaves an excess of 6,600 deaths. The fact is that many cities and districts across India have gone through a harrowing few weeks when patients could not find hospital beds.

What about the rural areas? The contact rates and the densities are indeed lower. But administrative excesses – cordoning buildings and whole villages, or compulsory internment of all positive cases, has caused stigma and fear, in both urban and rural areas. Problems of access to reliable critical care led to extensive and expensive private provisioning of doubtful quality. This has reduced trust and also the uptake of medical care. As a result, there is increased morbidity for both COVID-19 and other ailments. Finally, comorbidities have made the task of attribution of the cause of death more difficult.

In short, there is little reason to suspect that the final rural death rate would be any different from the urban rate of 1,000-1,200 DPM. The official rates depend on the correct registration of deaths and will be much lower than in cities.

Let us now come to the question of the current downward trend. Pune, perhaps the best reported and provisioned district, with a significant rural population stands at 600 DPM today. The estimated total deaths of other cities in decline too is in the range 500-600 DPM. The only possible reason for this secular decline is a disease prevalence of at least 50 per cent and the onset of community immunity. This sets up the correspondence between deaths and disease prevalence for urban Maharashtra at roughly 1 death per 900 infections.

What about other states? Let us look at Uttar Pradesh (UP) as an example. The circle diagram gives us many interesting insights. The official deaths are concentrated in the two cities where reporting is likely to be better. Several districts, for example, Hathras, have reported less than 10 total deaths. The people in Noida and Ghaziabad seem to have prefered Delhi for treatment, even though Delhi’s DPM at 355 was much higher.

As per the latest (as of May 30) link from the webpage of the UP health department, the total provisioning of critical care beds for COVID-19 in UP was 0.14 beds per 1,000. Compare this with 0.7 for Maharashtra. Fully 13 districts, for example Rae Bareli, had no beds at all. As per the trends in the daily death count, the epidemic seems to be on the wane and yet with a much smaller cumulative death count of only 33 DPM. As pointed out by other authors, in the national survey of 2018, the registration of deaths along with the cause of death as per the national MCCD protocol, in UP was estimated to be barely 5 per cent. Compare this with 35 per cent in Maharashtra. Given all this, it is unlikely that UP has a significantly lower death rate than Maharashtra. 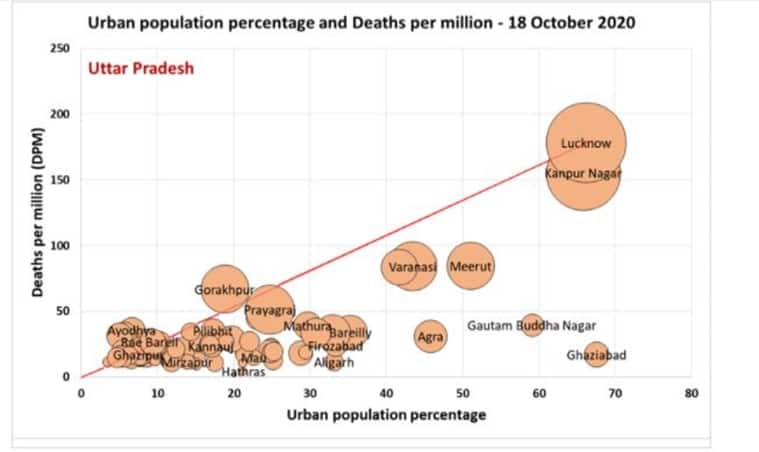 Thus, the downward trend of COVID-19 deaths in India is likely to have arisen from three causes. First, urban saturation has led to the onset of community immunity in many cities of India. This points to a nation-wide disease prevalence of 30-40 per cent and deaths of around 250-450 DPM already. Second, the ruralisation of the epidemic may have led to intrinsically lower rates in new infections. Finally, there is under-reporting and under-attribution of deaths. All of this is easily verified by community surveys and a review of regional death registration records.

The ultimate human cost, in terms of excess deaths, is likely to be in the range 500-1,500 DPM and will vary dramatically from state to state. It depends on the quality of care provided by the public health systems, the trust of the people in it and community comprehension and mobilization. It should not surprise us if, in the final reckoning, Kerala or Tamil Nadu do much better. In fact, a state-level comparative analysis would be an important first step to ensure that we do learn something from this crisis.

Milind Sohoni teaches at IIT Bombay, Nikhil Tikekar is a consultant and Alakhya Deshmukh is a student of Economics.

For all the latest Opinion News, download Indian Express App.

Farmers try to enter Delhi by breaking barricades at Ghazipur