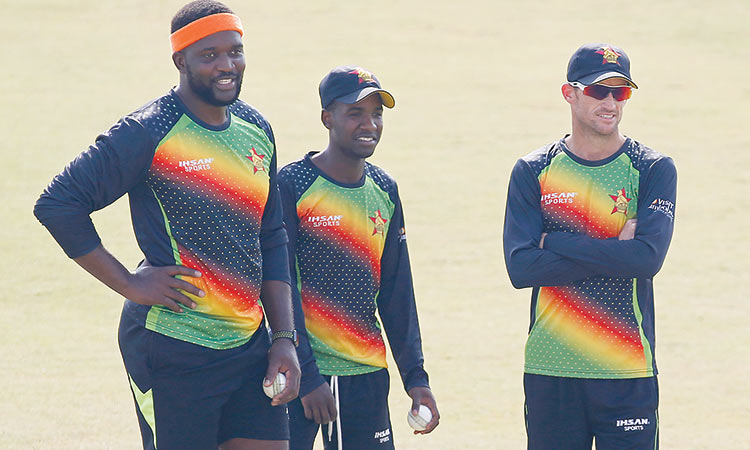 Zimbabwe cricket team players attend a practice session at the Pindi Cricket Stadium in Rawalpindi ahead of the first ODI on Friday. Associated Press

Johannesburg: Cricket South Africa (CSA) announced on Tuesday it will send a security assessment delegation to Pakistan this weekend with a view to the playing in the country in early 2021.

If the tour goes ahead it will be South Africa’s first visit to Pakistan since 2007/08.

Two subsequent “away” tours were staged in the UAE because of security concerns following a 2009 attack on the Sri Lankan team in Lahore.

No details of the planned fixtures were revealed but according to the International cricket Council’s future tours programme, South Africa are due to play in two world Test championship matches as well as three T20 internationals in January and February.

After the CSA’s entire board resigned on Monday, acting chief executive Kugandrie Govender said the matches against Sri Lanka, like those for the upcoming white-ball series against England, would be played without spectators because of Covid-19 restrictions.

On their previous visit to South Africa in 2018/19, Sri Lanka gained an upset 2-0 series win — the first by an Asian team in a Test series in South Africa.

CSA also announced Australia would visit South Africa for three world Test championship matches in March and April 2021, to be followed by Pakistan, who will play three one-day internationals and three T20 internationals. Dates for these tours will be announced later.

The Test series will be the first red ball series in South Africa for the Australians since the ball-tampering scandal of 2018.

Meanwhile, Pakistan’s tour, originally supposed to take place in September and October this year, was postponed amid high numbers of Covid-19 cases in South Africa.

The PCB said the tour would form part of the Men’s cricket World Cup Super League.

The league — with all teams playing four home and as many away series — will determine who qualifies for the Men’s World Cup in 2023, to be hosted by India.

The top seven teams will win a spot at the tournament, while hosts India automatically qualify.

Pakistan open their campaign in the Super League with a three-match, one-day series, starting Friday against Zimbabwe in Rawalpindi.

ROHIT INJURY INTRIGUING: The extent of Rohit Sharma’s hamstring injury has intrigued batting great Sunil Gavaskar after the opener was seen practising on Monday, hours after his omission from India’s tour of Australia on fitness grounds.

The selectors omitted him from both the test and limited-overs squads and the cricket board (BCCI) said its medical team would “continue to monitor the progress” without elaborating on the injury.

Hours later, the Mumbai Indians posted a video of their captain practising “in full flow” in Abu Dhabi, which baffled many.

“We are talking about the test matches, which are a month and a half way,” Gavaskar told IPL broadcaster Star Sports after Monday’s match.

“If he is practising in the nets for Mumbai Indians, then honestly I don’t know what kind of injury it is.

India and Australia will lock horns in a four-test series for the Border-Gavaskar Trophy in December-January, which will be preceded by six short-form internationals.

India have named Prithvi Shaw, KL Rahul and Shubman Gill in the test squad and one of them could partner Mayank Agarwal at the top of the batting order.

Agarwal’s own fitness is not beyond doubt but the BCCI was characteristically taciturn about it when naming the opener in all three squads.

The anything, anywhere model of globalisation- The New Indian Express