Can India’s Gaming Startups Leapfrog Chinese Rivals After The Ban?


After the ban of “Mobile Legends” and “Clash of Kings”, Indian gaming companies have a huge opportunity to fill the void created in the market.

India Gamers have shown an exemplary growth after the lockdown due to the Covid-19, there has been a rise in the average time spent by 41% on games in India during Lockdown 1.0

The launch of AatmaNirbhar Bharat Innovate Challenge by MeitY and NITI Aayog is expected to bring in more advanced gaming apps in the market and drive the growth of India mobile gaming market in future.

India’s ban on the 59 Chinese apps has not only set the social media market on fire with a slew of short video apps emerging as contenders but has also opened up the market for game developers. The ban which swiped away two popular titles — “Clash of Kings” and “Mobile of Legends” — has hit fans of these games hard. Both were free casual games and while Clash of Kings has 50 Mn+ downloads, and 4.1 rating on Google Play Store, Mobile of Legends has over 100 Mn downloads, with a rating of 4.2. So clearly, these were some of the most popular games in the market.

And while India’s favourite game PUBG Mobile has escaped a full ban for now, the government has banned it for army personnel in a subsequent notice. While PUBG Mobile isn’t originally from China and was actually created by South Korean company Bluehole, Chinese conglomerate Tencent Holdings has a 10% stake in Bluehole.

Whether or not PUBG Mobile, and several other Chinese gaming apps such as Mafia City, Lastempire, Guns of Glory, Ludo World, Cyber Hunter, Life After, Game of Sultan and many others also face a ban, the move has opened up the opportunity for Indian alternatives to many of these games as well as other casual titles.

India’s Gamer Base On The Rise

India is already among the top five mobile gaming markets in the world on the basis of the user base, driven by the proliferation of smartphones. Among the media & entertainment (M&E) sub-sectors, online gaming has the highest growth rate of 39.8% in 2019 from the previous year, according to an EY report.

With over 502.2 Mn smartphone users as of December 2019, according to market research firm techARC, India is the second largest smartphone market in the world after China. A whopping 77% of these smartphones regularly connect to the internet, which is greater than the entire population of the United States. Along with the growth in smartphone users has come the rise in online gamers. 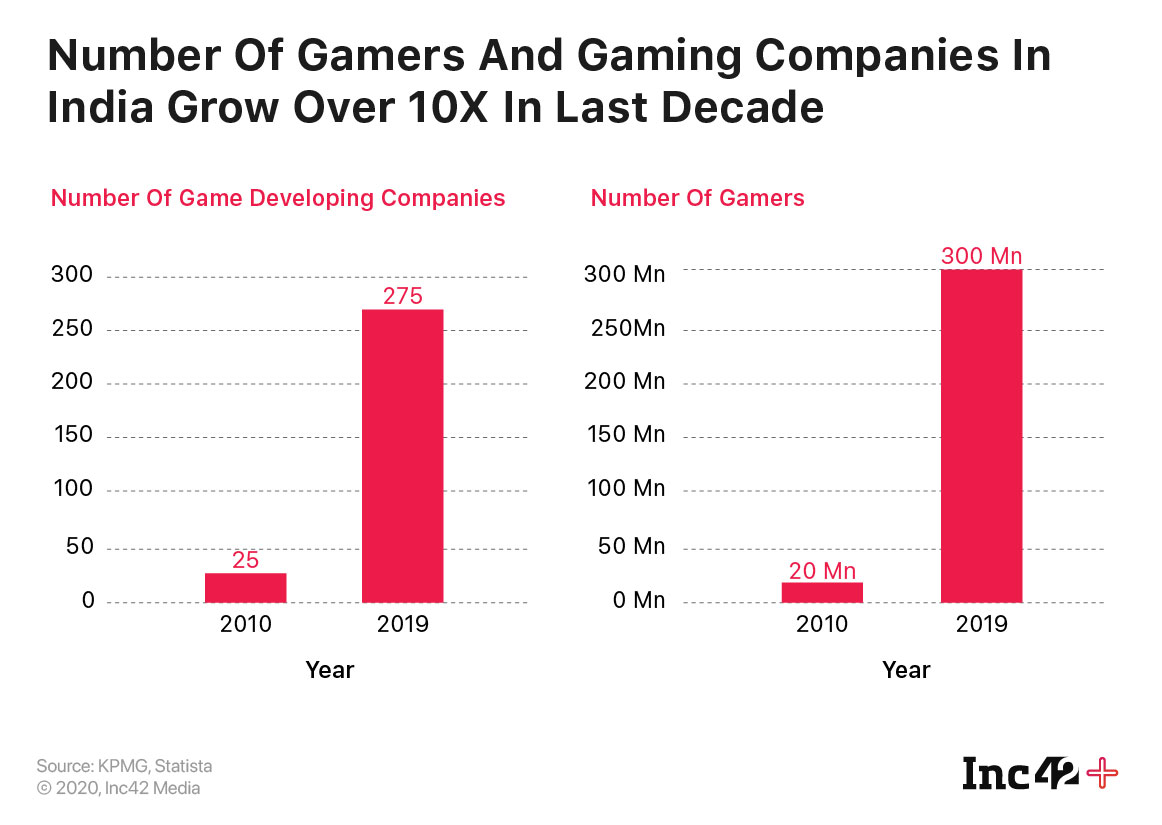 Besides social media apps such as Facebook, YouTube, TikTok and OTT streaming platforms such as Netflix and others, Indians are signing up for online games and gaming apps faster than ever.

But this growth has been accelerated in recent months with the nationwide lockdown driving up adoption further.

As seen in the Inc42+ exclusive deep-dive into the gaming industry’s growth during the lockdown months, startups such as WinZo experienced a 30% surge in traffic from metros and Tier-1 cities on a daily basis. Similarly, Ahmedabad-based Gamerji, which has conducted more than 6000 tournaments to date, has seen a 2.5X surge in traffic for esports post-Covid-19 in terms of user base taking it to more than 150K users a month. Pocket Aces’ game streaming platform Loco recently introduced the esports category and has seen 50x more streamer signups than it expected.

Further, according to the report titled “State of Online Gaming 2020” from Limelight Networks, on an average, Indian gamers spend four hours and eight minutes at a stretch this year, a 10% increase in the average time spent from 2019.

Backed by the growth in user base, Indian game publishers and titles are also setting the pace in the Indian mobile gaming market on Google Play Store relative to their Chinese counterparts. 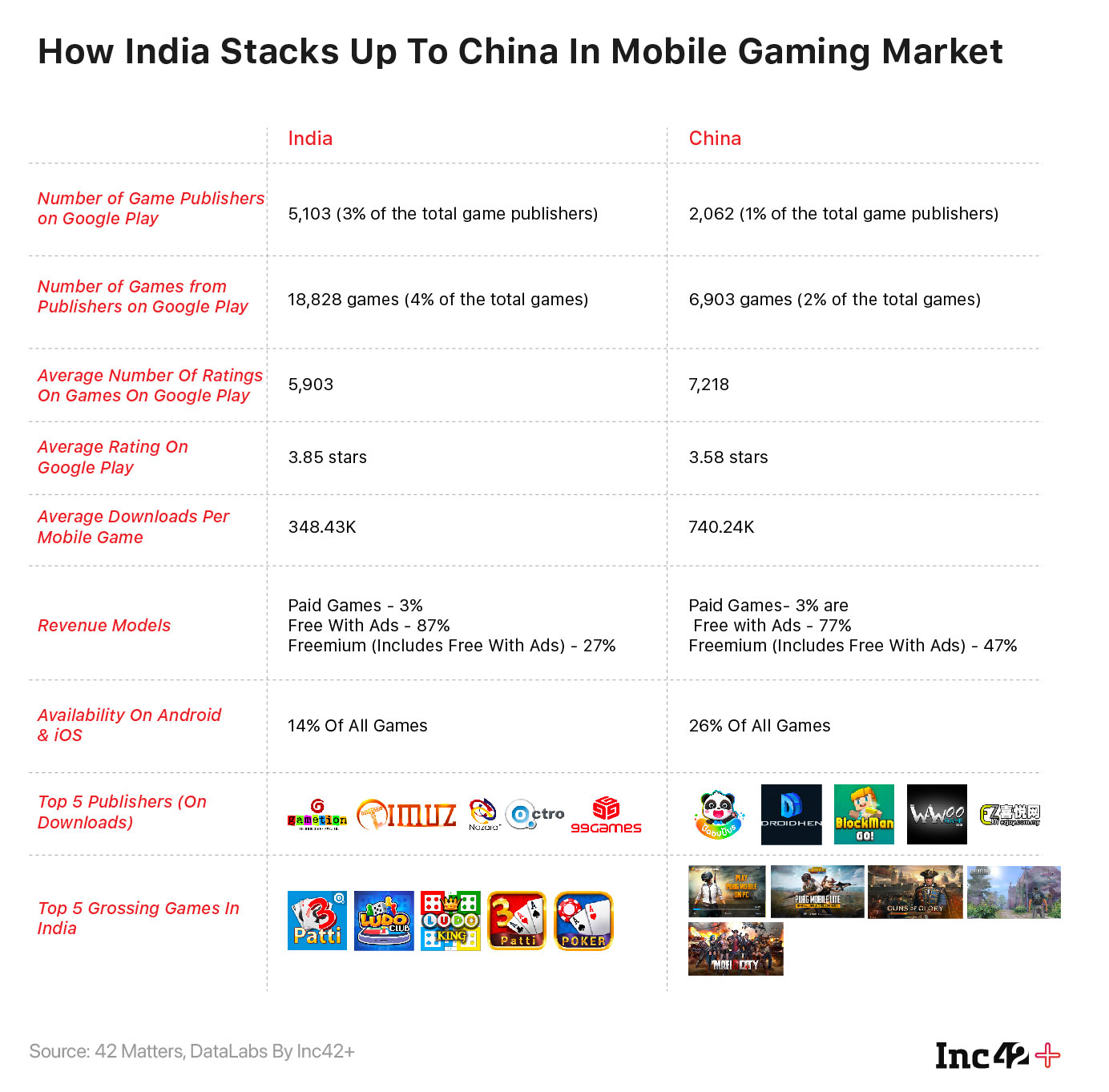 Who Will Win The Revenue Fight?

Beyond just downloads, when we look at the 20 top-grossing games in India and China, there are some clear trends visible. There are four Indian games in the top 20 list, while five Chinese games make the cut.

However, since game revenue is not available, it is not possible to look at how far ahead the top few apps are in relation to the others in the list.

When it comes to revenue, Indian games have a superior hand in genres such as casino games and board games. Considering that most Indian fantasy sports gaming apps such as HalaPlay, Dream11 and others are not available on the Google Play Store, we could not count them among the 20 top-grossing apps. Same is the case with multi-game platforms such as Mobile Premier League, WinZO Games and others that also offer games of skill and real money rewards.

On the other hand, Chinese games in the action, strategy genres have earned the most revenue from India, like most international titles. However, given that these games typically require bigger capital investments than casino games or board games, Indian gaming apps will only be able to challenge in this space once the market matures and users start paying more for games.

Will Indian Alternatives Rise Up To Outshine Chinese Games?

As seen in the social media space with the rise of the likes of Chingari, Mitron, Roposo, Bolo Indya and Trell, the mobile gaming segment will also see the entry of new Indian alternatives as well as the rise of existing titles.

JetSynthesys MD Rajan Navani, said that the company is pursuing global partnerships in Japan and US. JetSynthesys will primarily invest the funds in its gaming platform Navani highlighting that its esports platform Nodwin Gaming has grown to INR 100 Cr in revenue in the last four years.

The rise of gaming is underscored by the entry of Amazon in this space. The US tech giant launched Crucible, its free-to-play, third-person shooter game that rivals Fortnite, PUBG, Overwatch and League of Legends, in India in May 2020. Amazon has also tied up with mobile game developers to host Prime-only tournaments for its Prime members in the country. 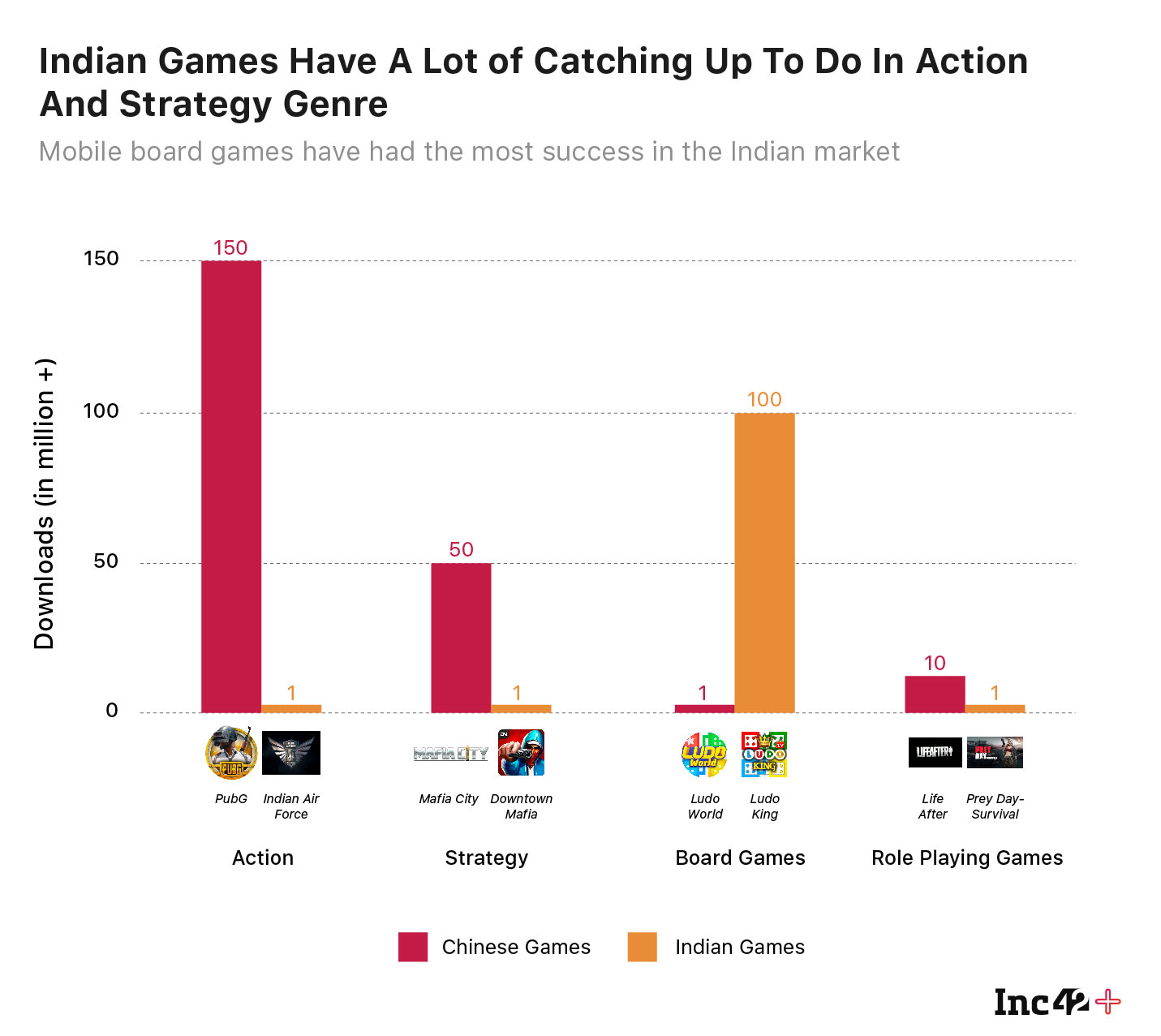 With the cancellation of live sports across the globe, sports enthusiasts have been left with no choice but to watch the reruns of old matches on television. But for those who want a taste of the action and that competitive feeling, online gaming has come to the rescue.

“There is higher player engagement in most platforms and this could potentially boost the esports economy, as most sponsors who would usually partner up with cricket or other major sporting events have all been postponed, this leaves esports as one of the few sporting events that sponsors can partner with to promote their product,” Yash Pariani, director, Indian Gaming League told Inc42 in an earlier interaction.

The Mumbai-based startup saw a 90-100% increase in customer engagement and daily sign-ups during the lockdown.

According to a report released in 2019 by KPMG and the Indian Federation of Sports Gaming, India’s online gaming industry is set to grow at 22% CAGR between 2018 and 2023, with esports drawing in major revenue and driving the growth.

Given this huge opportunity, the ban on popular Chinese gaming apps is expected to create a void in the Indian gaming market. Indian game developers and publishers can grab this opportunity to fill the supply gap and capitalise on this moment. Given the government’s push for homegrown gaming apps through the AatmaNirbhar Bharat Innovate Challenge, Indian game developers not only have the right market conditions, but also have the backing of policymakers and investors to make the most of this golden opportunity.