Here are the inside details of the schedule that was wrapped up on Friday. The director and his crew left for Los Angeles yesterday

After shooting in Mumbai for the past week, Hollywood filmmaker Christopher Nolan left the city at 3 am yesterday, while his crew followed him later in the day. The director landed in Mumbai on September 13 with actors Robert Pattinson, John David Washington and cinematographer Hoyte Van Hoytema (Dunkirk, Interstellar) for the shoot of his upcoming spy action-thriller, Tenet. The shoot kicked off at the Gateway of India on September 16 where Dimple Kapadia also joined the cast. The Oscar nominee was easily spotted at various locations in South Mumbai. Other than India, the film is also being shot in the US, Estonia, Italy, Norway, United Kingdom and Denmark.

BT got a glimpse into the shoot at various locations in Mumbai. Without much hullabaloo, Nolan carried out an elaborate shoot on the land, sea and air.

The director made the most of his time in the city. We were told, “Nolan doesn’t indulge in small talk, and even if he does, it isn’t an irrelevant conversation.” Even the Mumbai rains couldn’t deter him. Our source shared, “He’s driven, but unpredictable. He was to shoot only at Colaba Causeway and Yacht Club on the first day, but he finished those scenes quickly and got into a launch at the Gateway of India to start shooting the scenes that were scheduled for the next day. Within two days, he moved to the fourth location — a high-rise at Breach Candy. There, the crew shot from 4 pm to 6 am and finished the stunt scenes in just three days.” Nolan finished his ten-day schedule just in five days. The Mumbai shoot ended on Friday at 7 pm. Nolan and crew, who were stationed on the footpath opposite the high-rise with the cameras, clapped and congratulated each other after calling it a wrap. Nolan was the first to leave for the SOBO hotel, and his team followed soon after. They left for Los Angeles yesterday, ahead of their schedule. The Shoot started with a traditional puja

The crew of the film was seen performing a puja in the wee hours of Monday morning at the Colaba Causeway market before the shoot began.

No scenes were shot at the restaurant set that was erected for the film on the sea-facing promenade near the Gateway of India. Named Chand restaurant, we hear, the set was strictly a back-up in case it became impossible for Nolan to shoot in the sea as planned. The filmmaker stuck to real locations in South Mumbai instead — Colaba Causeway market, Cafe Mondegar, Yacht Club, Gateway of India, a Breach Candy high-rise, an adjacent smaller building and terraces of both these buildings. A local vegetable and fast food market were created in these buildings’ compound for the shoot. 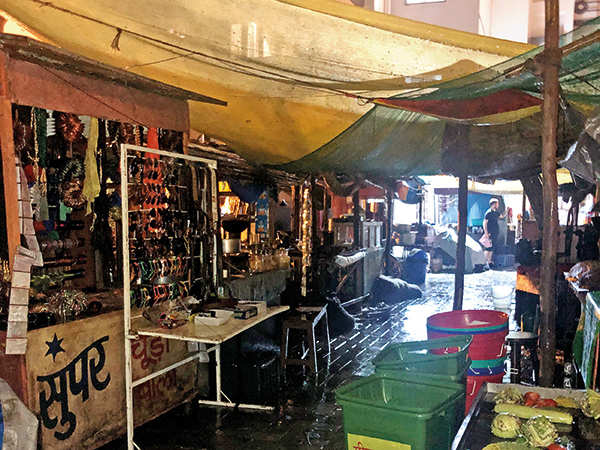 At Nolan’s Gateway shoot, men and women dressed in traditional Rajasthani attire were seen. Apparently, Nolan loved the outfits, which he recalled seeing during his Jodhpur shoot at Mehrangarh Fort for The Dark Knight Rises (2012). Apparently, he asked his team to fly more people straight from Rajasthan to Mumbai, instead of dressing up locals in that outfit to retain authenticity.

On Friday (the last day of the shoot) a helicopter was used to film some aerial shots of the Breach Candy high-rise and the sea. Shooting on the main road of an area like Breach Candy was well-managed despite high traffic and rains. Vehicles were allowed to pass, but they weren’t allowed to halt near the shoot. 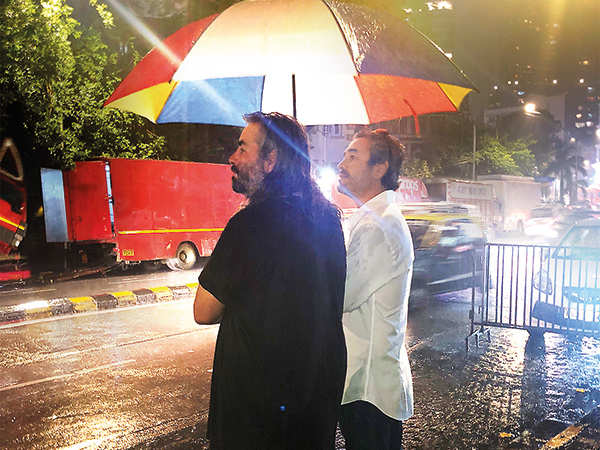 The actors or the director didn’t have a coterie of staff accompanying them. They moved around freely and the security wasn’t overwhelming either. They predominantly ensured the shooting area wasn’t overcrowded by puzzled onlookers as they could disrupt the shoot by accidentally walking into the frame. The crew also took very few breaks to ensure that the work was completed at a fast pace.

Fans have a field day

Be it at the Colaba Market or Breach Candy, a few lucky fans got pictures clicked with the ace director. However, photography was strictly prohibited on the sets. Fans were happy to meet him and later tell us their tales. Lydia Almeida, who got her young son Ian, to watch the shoot, said, “We live in the building that they were shooting the film in. My son’s exams were on, but he insisted he wanted to meet Nolan. We got to meet him!” Another diehard fan Mehul, who met him at Colaba said, “The universe conspired and I got to meet him. I was crossing the signal towards Regal when I spotted him. I was nervous, but I told him that I had come to Jodhpur in 2011 to meet him, but couldn’t. It finally happened in Mumbai!” This obsession with elections – mid-day.com