Behind The $1.2 Bn India Opportunity

The fact that India is the second-largest smartphone market in the world — and the fastest-growing one at that — has already brought on the giants of the mobile app ecosystem to the Indian shores. Besides the likes of TikTok, Spotify, Netflix and a host of other internet giants coming to tap the Indian market, global mobile gaming startups are also looking to cash in over the past couple of years.

New-age mobile gaming companies in India are following in the footsteps of Miniclip, Gameloft, Zynga among others, that have always had massive user bases in India, but titles such as Free Fire, Call of Duty, PUBG Mobile, Fortnite, Knives Out, Arena Of Valor, Clash Of Clans and others have ruled the Indian mobile gaming landscape in the past few years. With the Covid-19 pandemic, mobile gaming found a captive audience and growth, but at the same time, some such as PUBG Mobile and other games of Chinese origin have had to deal with the policy challenges.

Despite this minor bump in the road, mobile gaming in India is poised for a massive opportunity. The Indian mobile gaming market is pegged to be a $1.2 Bn market opportunity by the end of 2020. With this market size, India will finish 2020 in sixth position globally and among the top five markets for mobile gaming in terms of user base.

Besides user growth, mobile gaming has also seen skyrocketing engagement — three out of four Indian players enjoying mobile games a minimum of twice a day. The latest report by Inc42 Plus — Mobile Gaming In India: Market Opportunity Report, 2020 — delves into this burgeoning space and identifies the brightest spots in the mobile gaming landscape. 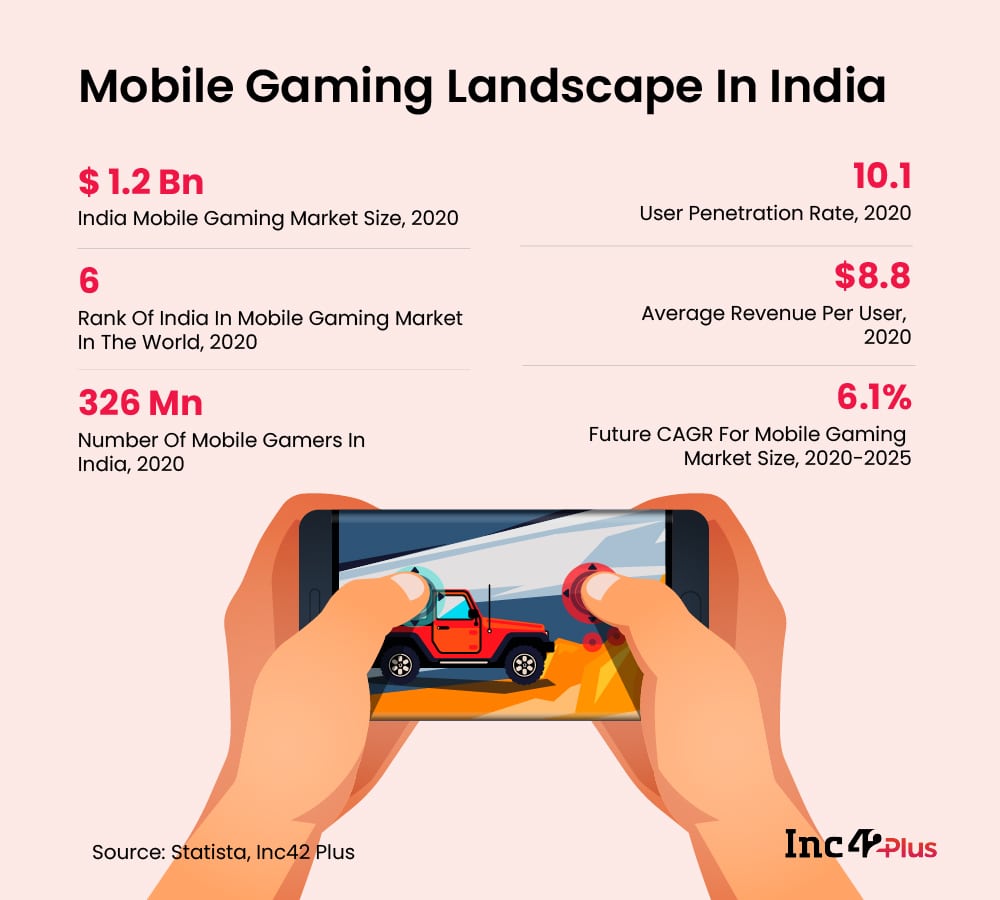 With the lockdown across the globe, people not only had more time on hand for household chores, but also to delve into their hobbies and passions. Mobile gaming, like many other niche categories, benefitted from this higher engagement time and the demand for discovery of new avenues of entertainment. This is also driving the overall revenue in this sector, which is projected to grow by CAGR 6.1% in the next five years, as per our analysis.

Mobile game downloads have been steadily growing since April 2020, reaching a peak of 197 Mn in a single week in that month —  a 75% jump compared to the weekly average of the previous quarter. Casual gaming titles Carrom and Ludo King were among the most popular games and grew by 50-75%.

Off the top five apps most frequently downloaded, Ludo King stood in the 4th position with 9.5 Mn downloads between March 25 and April 10. The game’s active daily user base grew from 13-15 Mn prior to the lockdown to 50 Mn during the lockdown.

Further, Paytm’s gaming vertical Paytm First Games saw a threefold increase in its user base in March. The user base burgeoned by 200% and the platform observed 75,000 new users joining daily. The company also witnessed that lower tier cities and rural India also contributed more traffic during the lockdown than before. Paytm First Games’ platform includes casual games such as rummy, ludo, pool, and snake wars.

India Vs The World In Mobile Gaming Arena

India currently stands in the sixth position globally in the mobile gaming market in terms of market size, with China leading the way, followed by the US, Japan, South Korea and the UK.

Despite India being the second largest smartphone market, it had a miniscule smartphone penetration of 36.7% in 2019. This indicates massive room for growth, since the Indian market is way behind than other countries too in terms of user penetration, with a user penetration rate of 10.08% in the gaming segment, ranking 111th in the world.

Along with overseas tech giants and large gaming corporations, India’s mobile gaming market is being driven by domestic innovation.

While fantasy sports and games of skill genre have been the dominant segments in gaming in terms of new startup launches, Mumbai-based Gametion Technologies’ Ludo King has been the title with the most traction on Google Play Store.

Besides Gametion, Nazara Technologies is another mobile gaming company that has seen the market go through various ups and downs and has preferred to go for an ecosystem approach with multiple acquisitions. Having launched in 2000, Nazara is preparing for an IPO and would become India’s first publicly-listed mobile gaming company.

Among the new-age models are the likes of SuperCric, which is a cricket manager simulation tool, launched in September 2020 and backed by Malta-based company, Nordanvind Gaming. Said to be an AI-powered proprietary cricket simulator, SuperCric uses real historical data to enable better choice-making for fantasy gamers during live matches. It is said to have a 90% accuracy rate in predicting wins for fantasy gamers.

Even ecommerce giant Flipkart has stepped into the mobile gaming arena with the acquisition of Mech Mocha. Founded by Arpita Kapoor and Mohit Rangaraju in 2014, Mecha Mocha has been backed by investors including Accel Partners, Blume Ventures and Shunwei Capital.  The real-time multiplayer social gaming company is among a slew of startups such as WinZO, Mobile Premier League, SuperGaming, Juno, Zupee and others trying to carve out market share and create a wave of loyal users as the market evolves.

Besides casual games and fantasy sports, the next wave of mobile gaming in India will see a big role played by augmented reality and virtual reality-based titles.

Besides the likes of Facebook (Oculus) and other niche hardware companies trying to break through into the Indian market, Reliance Jio also forayed into VR and AR entertainment with its JioGlass mixed reality device, which would support up to 25 mixed reality applications on launch, including games. The company is expected to launch the device at an affordable price point for the Indian market.

The Rise Of The Rural Gamer.

The Way Forward For Mobile Gaming In India

According to Inc42 Plus analysis, the mobile gaming market in India is poised to take off and reach $1.6 Bn by 2025 owing to the growing smartphone penetration and rising interest in gaming-related spending and engagement.

While over the past couple of years, the major growth in terms of spending and engagement time has been towards battle royale genre games such as PUBG Mobile — banned but likely to return in December with a new management structure and data localisation — and Free Fire, and is likely to be subdued 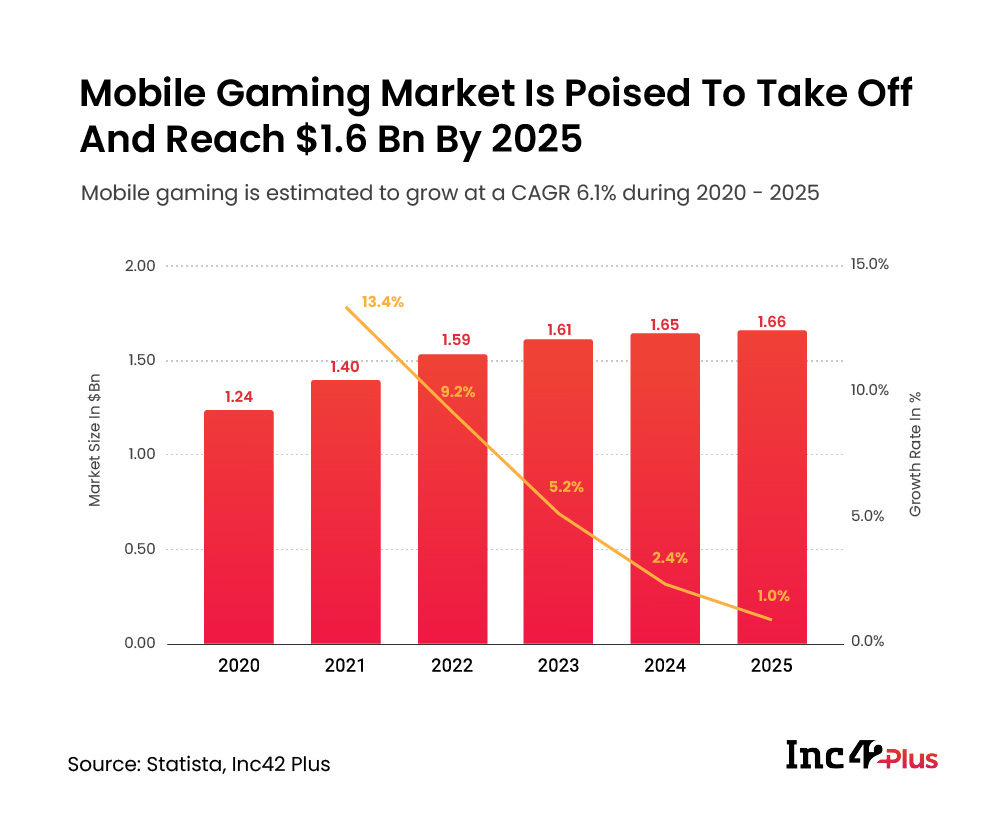 Other areas that are likely to see bigger engagement numbers in the future include real money games i.e fantasy sports and games of skill such as rummy and poker. These, however, face the threat of legal challenges and policies as many are alleged to be promoting gambling and profligate spending.

Beyond this, social gaming is also on the rise with the likes of WinZO, Zupee, MPL and others likely to continue their rise in the Indian market. If Gametion Technologies’ Ludo King has shown anything, there’s still a huge appetite for casual games and non-money games given the right approach to social gaming.

Know more about the huge potential of mobile gaming market in India in the latest release from Inc42 Plus —Mobile Gaming In India: Market Opportunity Report, 2020

Unforgettable places to visit in India on New Year’s Eve